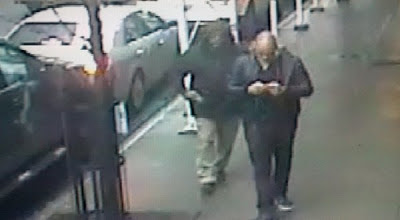 This security-camera still taken moments before the murder of Brandon Woodard shows Mr. Woodard in the foreground and the gunman walking up behind him and pulling a gun from his jacket pocket. 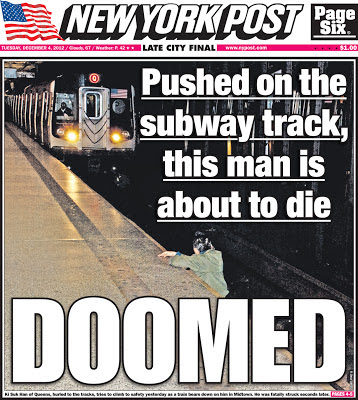 Tragedy on the NYC Subway. DOOMED -Pushed on the subway track, this man is about to die. RIP. New York Post cover for Tuesday, December 4, 2012.

The two photos, taken a week apart, though hardly identical, have much in common: a man seconds away from sudden public death, the instrument of his demise closing in on him. But the photos have been received very differently.

The New York Post was widely criticized for publishing a picture of a man about to be crushed by a subway train — and we were criticized for rerunning it in a piece about The Post’s cover. Yet very few eyelashes were batted about the widespread publication Tuesday of a chilling photo of Brandon Woodard texting obliviously on a Midtown street as a man drawing a gun from his pocket prepared to murder him.


R. Umar Abbasi, a freelance photographer for the New York Post, talks about the controversial photo with the Today Show