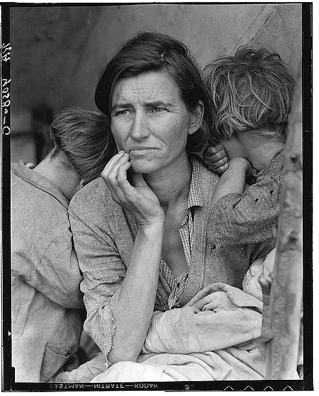 In 1960, Lange spoke about her experience taking the photograph:

“I saw and approached the hungry and desperate mother, as if drawn by a magnet. I do not remember how I explained my presence or my camera to her, but I do remember she asked me no questions. I made five exposures, working closer and closer from the same direction. I did not ask her name or her history. She told me her age, that she was thirty-two. She said that they had been living on frozen vegetables from the surrounding fields, and birds that the children killed. She had just sold the tires from her car to buy food. There she sat in that lean-to tent with her children huddled around her, and seemed to know that my pictures might help her, and so she helped me. There was a sort of equality about it.” -Wikipedia

As was the custom among RA/FSA photographers who were trying to adhere to scientific method, her notes record no names but they do feature socioeconomic categories such as “destitute pea pickers” and “mother of seven children.” The picture itself needs no such help to draw on the prior decades of documentary photography. Direct exposure of ordinary, anonymous, working-class people engaged in the basic tasks of everyday life amidst degraded circumstances was the template of the social reform photography established by Lewis Hine and others in the early part of the twentieth century. The connection between photographic documentary and collective action was a well-established line of response, available as long as the photographer did not include the signs of other genres such as the focus on dramatic events of ordinary photojournalism or the obvious manipulation of art photography. Many other photos also met this standard, however, while the “Migrant Mother” quickly achieved critical acclaim as a model of documentary photography, becoming the preeminent photo among the hundreds of thousands of images being produced by RA/FSA photographers and used to promote New Deal policies. Roy Stryker, the head of the RA/FSA photography section, dubbed Lange’s photo the symbol for the whole project: “She has all the suffering of mankind in her but all of the perseverance too. A restraint and a strange courage. You can see anything you want to in her. She is immortal.” According to a manager at the Library of Congress, where the image remains one of the most requested items in the photography collection, “It’s the most striking image we have; it hits the heart.… an American icon.” Read more.