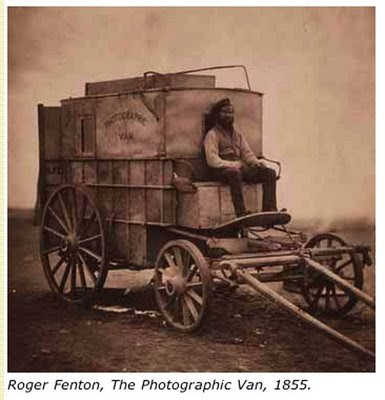 Roger Fenton's Crimean War photographs represent one of the earliest systematic attempts to document a war through the medium of photography. Fenton, who spent fewer than four months in the Crimea (March 8 to June 26, 1855), produced 360 photographs under extremely trying conditions.

While these photographs present a substantial documentary record of the participants and the landscape of the war, there are no actual combat scenes, nor are there any scenes of the devastating effects of war.

The Library of Congress purchased 263 of Fenton's salted paper and albumen prints from his grandniece Frances M. Fenton in 1944, including his most well-known photograph, "Valley of the Shadow of Death.”

Roger Fenton originally studied law in London before training as a painter there and in Paris. Fenton became a photographer and his career in the medium only lasted twelve years, but covered many subject matters. He was a founding member of the Photographic Society in London and photographed the royal family.

In 1852, Fenton made the first photographs of Russia and Kremlin. Then in 1853, he was asked to document the collection of the British Museum.

In 1862, Fenton abandoned photography because of the commercialization of the medium and returned to his law practice.


ROGER FENTON
b. Mar 1819; d. 8 Aug 1869
Roger Fenton is particularly known for his coverage of the Crimean War, which is a pity, because it only formed a small proportion of his output in other areas, and also somewhat obscures the major part he played in promoting photography in general.

After studying at London University, Fenton studied art in London, and later in Paris under the painter Paul Delaroche. However, having had little success as a painter, in 1844 he returned to London and studied law.
In January 1851 he visited Paris, and was impressed by the freedom that photographers in France had been granted as a result of the Daguerreotype process having been made available to all. By contrast, progress in England was slow because of Talbot's claims arising from his patent.
In 1852 he visited Russia, and his photographs were amongst the first ever to be seen in England, guaranteeing him instant fame. Back in England, he proposed the formation of a Photographic Society, and on 10 January 1853 this came into being, and he served as its Secretary for three years. (This is now the Royal Photographic Society).

The Crimean War (1853-1956) was one of many between Russia and the Turks, but this time involved the British and French. William Russell, a journalist working for The Times, and one of the first war correspondents, began to send a series of disturbing accounts of the conduct of this war, and particularly the conditions under which theBritish forces were fighting. Less than 20% of the fatalities of the forces were due to war wounds; the majority of these were caused by disease and the freezing cold. When Russell began to report the inadequacy of the medical facilities and the fact that British soldiers, not having even been issued with winter uniforms, were dying with cold, feeling over the government's handling of the war began to mount.
In 1855, in response to this continuous criticism of the government's handling of the war, Fenton was commissioned to photograph it, and produced over 350 pictures of the conflict.

Though he is seen as a war photographer, his pictures showed a very one-sided cosmetic view:
• as it was largely a propaganda exercise, he was bound to show the well-being of the troops;
• he wanted to sell his pictures, and gruesome realistic ones were probably not very marketable!
• many of his pictures were of the officers, a sign, perhaps, of his sound business sense!

In fairness to him, he often felt obliged to photograph them: "If I refuse to take them," he complained, "I get no facilities for conveying my van from one locality to another."
Fenton's war pictures, therefore, tend to portray war as a gorgeous pageant; there are no dead bodies, and one might almost imagine that the Crimean war was almost like a picnic. There are no action shots (this for technical reasons), but those of soldiers are carefully posed groups, almost as if they were cricketers just about to go in to bat. It is this bias which makes one question slightly whether he was a true war photographer in the same league as the Mathew Brady team. Moreover, as an agent of the government, his portrayals were somewhat slanted; the charge of the Light Brigade, for example, was one disaster that was depicted as a glorious event.

One has to bear in mind the considerable difficulties experienced at this time by photographers on location. Like all photographers of the time, he found it necessary to take with him all the sensitising and processing equipment. To do this, Fenton took with him a converted wine-wagon as a caravan, and this occasionally became the target, probably being mistaken for an ammunitions vehicle. In a lecture to the Photographic Society he gave an account of the conditions:
"Though (the van) was painted a light colour externally, it grew so hot towards noon as to burn the hand when touched. As soon as the door was closed to commence the preparation of a plate, perspiration started from every pore; and the sense of relief was great when it was possible to open the door and breathe even the hot air outside."

Fenton also had his own battles..."It was at this time that the plague of flies commenced. Before preparing a plate the first thing to be done was to battle with them for possession of the place. The necessary buffeting with handkerchiefs and towels having taken place, and the intruders having being expelled, the moment the last one was out, the door has to be rapidly closed for fear of a fresh invasion, and then some time allowed for the dust thus raised to settle before coating a plate...."

As the summer arrived, Fenton found that the developing liquid became so hot that he could hardly put his hands in it! He also had to stop work earlier and earlier each day, many of his portraits having been taken before seven o'clock in the morning.
Upon returning from the Crimea (but not before he too had endured cholera) he had published bound volumes of his prints. However, they did not sell too well, as people hardly wished to keep mementos of an event which most would wish to forget.
Another reason for the lack of sales was that the prints, still on salted paper, had a tendency to fade. Fenton himself was sufficiently concerned about the fading of pictures, for he chaired a Photographic Society "Fading Committee."

Fenton also produced a number of Stereoscopes of architecture, landscapes and still life subjects. He then produced a series of photographs of cathedrals. For reasons that are not clear, he gave up taking photographs in 1861 and returned to the law; it has been suggested that this was because of his dislike for the increasing commercialization of photography.

It was probably his bout of cholera which led to his early death at the age of forty-nine. It is worth noting that this prolific output and contribution to photography was confined to just eleven years or so.

Over six hundred of Fenton's prints are now preserved at the Royal Photographic Society - the most comprehensive archive of his work. 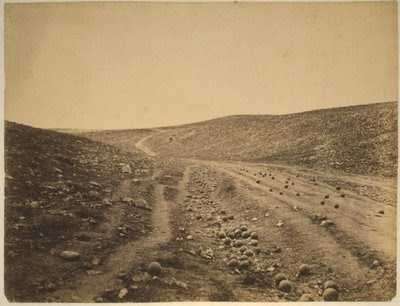 ..in coming to a ravine called the valley of death, the sight passed all imagination: round shot and shell lay like a stream at the bottom of the hollow all the way down, you could not walk without treading upon them...
--Roger Fenton

Fenton's most famous photograph is also one of the most well-known images of war. Across a desolate and featureless landscape, not a single figure can be found. The landscape is inhabited only by cannonballs--so plentiful that they first appear to be rocks--that stand in for the human casualties on the battlefield. The sense of emptiness and unease is heightened by the visual uncertainty created by the changing scale of the road and the sloping sides of the ravine.

Borrowing from the Twenty-third Psalm of the Bible, the Valley of Death was named by British soldiers who came under constant shelling there. Fenton traveled to the dangerous ravine twice, and on his second visit he made two exposures. Fenton wrote that he had intended to move in closer at the site. But danger forced him to retreat back up the road, where he created this image.

On a commissioned assignment, Fenton traveled in 1853 to the Crimean peninsula on the Black Sea, where England, France, and Turkey were fighting a war against Russia. To avoid offending Victorian sensibilities, Fenton refrained from photographing the dead and wounded. His more than three hundred images of encampments, battle sites, and portraits of all miltary ranks, became the first extensive photo-documentation of any war. When exhibited in England, Fenton's photographs of the Crimean War established his reputation.
at Saturday, September 26, 2009