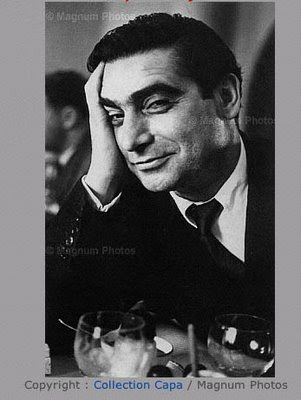 Robert Capa (1913-1954), nee Andre Friedmann, was born in Budapest in 1913. Like many of his student companions of the thirties, he was keenly involved in the political turmoil of the period, and at the age of 18 found it expedient to leave Hungary. He moved on to Berlin and then Paris, where Chim persuaded the editors of Regards to give Capa a job covering the Front Populaire movement.
In 1936, Capa went to Spain to cover the Spanish Civil War with his friend Gerda Taro, nee Gerda Pohorylles. By that time, he was using the camera as a means of expression and setting on film the political life around him. Her tragic death ended her photographic career and left a deep scar on Capa's personality. 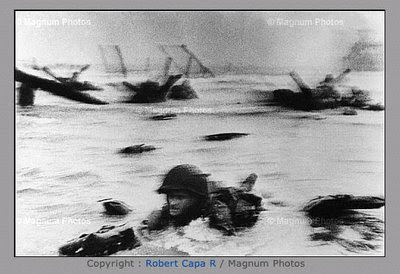 Capa went on to cover the Second World War from 1941 to 1945 in European theatre, and received the Medal of Freedom Citation from General Dwight D. Eisenhower. His photographs of the D-Day landing are classics. He became known as the quintessential war photographer though war was not the only subject of his camera.
In 1947, with his friends, David Seymour "Chim", Henri Cartier-Bresson, George Rodger and Bill Vandivert, he began a picture agency named Magnum. He spent the next few years making Magnum into a successful cooperative, and photographing the good times with his artist friends, including Picasso, Ernest Hemingway and John Steinbeck.
While visiting pre-war friends in Japan he was called to replace another photographer on a LIFE assignment in Indochina. Capa took the assignment, and was killed after stepping on a land mine, the first American correspondent to die in Indochina.
Steinbeck said of Capa: "The effect of Capa will be found in the men who worked with him. They will carry a little part of Capa all their lives and perhaps hand him on to their young men." Of photography, Capa said, "If your pictures aren`t good enough, you aren't close enough."

On December 3, 1938, Picture Post introduced "The Greatest War Photographer in the World: Robert Capa" with a spread of 26 photographs taken during the Spanish Civil War at the battle of Ebro.
The "greatest war photographer" hated war. He was born Andre Friedman, a Jew from Budapest, and studied political science at the Deutsche Hochschule für Politik in Berlin (1931-33). At the same time he was working part-time in the lab of the Ullstein magazines group to whom he sold his first published picture of Leon Trotsky's 1931 Copenhagen meeting. Driven out of the country by the beginnings of the Nazi regime, he settled in Paris in 1933.
In Paris he participated in the beginnings of the agency Alliance Photo and met the journalist and photographer, Gerda Taro. Together they invented the "famous" American photographer Robert Capa and sold his prints under that name. He met many artists, among them Picasso and Hemingway, and began friendships with colleagues that would be essential in the creation of Magnum, such as David "Chim" Seymour and Henri Cartier-Bresson. Beginning in 1936, Capa's coverage of the Spanish Civil War appeared regularly in Vu, Regards, Ce Soir, Weekly Illustrated and Life. His 1936 picture of the Loyalist soldier falling to his death brought him international reputation and became a powerful symbol of war. In Spain Capa also shot newsreels for March of Time, Time-Life's film department.
After his companion Gerda Taro was killed in Spain Capa traveled to China (1938), then emigrated to New York in 1939. From 1939-45 he photographed World War II (most famously the landing of American troops in Omaha beach, the Liberation of Paris and the battle of the Bulge) as a Life and Collier's correspondent in Europe.
In 1947 he founded Magnum Photos, in conjunction with Henri Cartier-Bresson, David Seymour, George Rodger and William Vandivert. The next year Capa traveled to Russia with John Steinbeck, and from 1948-1950 to Israel with Irwin Shaw, completing the first of a number of stories for Holiday. In 1951 he became president of Magnum and initiated several group projects involving all his colleagues.
Robert Capa died on May 25, 1954, in Thai-Binh, Indochina, after stepping on a land mine while photographing for Life. He was awarded the War Cross with Palm by the French army. The Robert Capa Gold Medal Award was established in 1955 to reward exceptional professional merit.