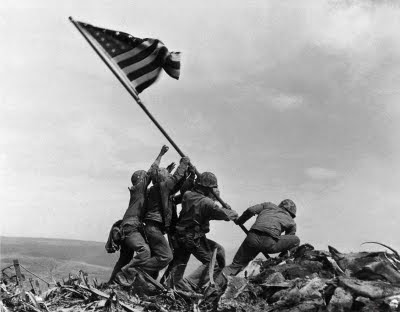 FLAG-RAISING AT IWO-JIMA
On Feb. 23, 1945, Associated Press photographer Joe Rosenthal captured the Pulitzer Prize-winning picture of Marines raising the flag on Mount Suribachi, Iwo Jima. He recalled, "I could only hope that it turned out the way that I looked at it through the finder." During World War II, Rosenthal also covered the invasions of New Guinea and Guam. Joe Rosenthal died on August 20, 2006 at the age of 94.