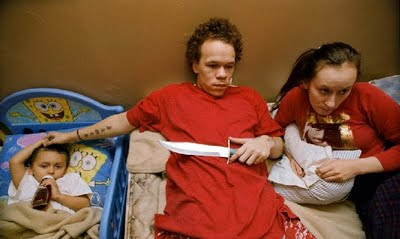 As a journalist and activist I have dedicated my life to exploring the how and why of class inequity in America, I am concerned with the internalized social messages that will live on for generations after our economic and social policies catch up with the reality of living on the bottom rung of America’s upwardly mobile society. My project explores the way that money is but a symptom of self worth and a means by which humans separate from each other. Poverty is an emotional rather than physical state with layers of marginalization to cement those who live under them into their place. The economic crisis as it is called has done some to take the moral sting out of being poor, though the conversation remains centered on economic rather than social stimulus relief. Thus indicating that it is those that are recently without money rather than Americans whose ongoing struggles left them un-phased by the headlines.

My project has followed seven women for five years as their escape routes out of generational poverty have lead to further entrapments. Read more.

Upstate Girls - What Became of Collar City from The Raw File on Vimeo.